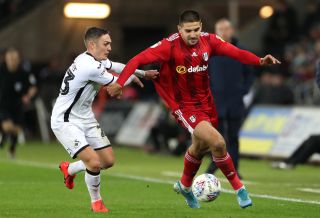 Fulham manager Scott Parker believes Aleksandar Mitrovic will be the subject of transfer interest in January after he continued his prolific scoring streak in the 2-1 win at Swansea.

The Serbia striker has now scored 23 goals in 23 games for club and country this season and his brace in south Wales lifted his side to within two points of the automatic promotion places.

“Mitrovic loves it at this place (Fulham), it’s his home and he’s comfortable,” said Parker. “When you have a top striker like Aleksandar in your team there will always be people floating around, but he’s happy and I’m sure we’ll be alright.

“He’s motivated by goals, typical striker, he’s first class. We get the ball in the right areas and he’s there to finish them.”

Mitrovic silenced the Liberty Stadium crowd with his first goal in the 22nd minute after Sam Surridge and George Byers had gone close for the hosts.

Aboubakar Kamara connected with Joe Bryan’s cross to send a side-footed shot crashing back off the bar, but Mitrovic followed up to head in the opener.

He then punished Swansea on the break two minutes before half-time. Kristoffer Peterson’s pass deep in his own half was intercepted by Josh Onomah into the path of Ivan Cavaleiro.

Onomah raced into the box to get on the end of his cross but scuffed a shot into the path of Mitrovic, who swept it into the top corner.

Byers gave Swansea hope with 25 minutes remaining when he headed in from Barrie McKay’s cross after his initial free-kick was blocked by the wall, but it wasn’t enough to cancel out Mitrovic’s double.

“They started the game pretty strongly and we had our keeper to thank in the first 10 minutes, where he pulled off a couple of good saves,” Parker commented.

“But I felt from those early scares we dominated the game and controlled the game. We put the ball in the right areas and got our nose in front.”

The Swans have now taken just four points from a possible 21 at home since the start of September, but manager Steve Cooper saw signs of improvement.

He said: “In terms of the chances we created and the performance level, maybe we deserved more.

“But we have not taken the chances and given away – particularly the second goal – a poor goal.

“We know Mitrovic plays up front for them and he does not miss those chances, but we have given him the opportunity.

“I thought it was our best performance for a while and that’s why we are frustrated not to get a draw.

“We played some good football and created a lot more chances than we have done previously here. That was an objective.”