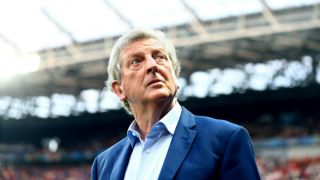 Roy Hodgson is back in football after agreeing a deal to replace Frank de Boer as Crystal Palace manager following the Dutchman's ill-fated 77-day stint in charge at Selhurst Park.

The appointment sees Hodgson return to the dugout for the first time since leaving England in the wake of their humiliating Euro 2016 elimination by Iceland in the round of 16.

One of England's most experienced coaches, Hodgson is held in high esteem across Europe after successful spells with Halmstad, Malmo, Switzerland and Inter.

5 - Palace will be the fifth club Hodgson has managed in the Premier League and his first since leaving West Brom in 2012, with whom he took his career tally to 216 top-flight matches as a manager in England.

3 - Hodgson will become the third oldest manager to take charge of a Premier League game, behind Bobby Robson and Alex Ferguson. He will be 70 years, 38 days old on Saturday, should he take charge against Southampton.

36% - It was at The Hawthorns where Hodgson had his best win ratio (36 per cent), winning 18 of his 50 league matches in charge after taking over with the club only out of the bottom three on goal difference.

20 - A similar win percentage record of 35% was not good enough during his spell at Liverpool, however, with the Hodgson dismissed after just 20 Premier League matches at the helm - nine of which were defeats.

94 - Hodgson is still remembered fondly for his heroics while in charge of Fulham, where he managed a personal-best 94 Premier League matches between 2007 and 2010.

7 - His record of winning 34.04 per cent of league matches may have been his worst in England's top tier, but he steered them away from relegation in his first season, secured the club's best Premier League finish of seventh the following year and then took them to the Europa League final.

1997 - Hodgson's first taste of Premier League football came in 1997 when he was appointed by Blackburn Rovers, lasting just over a year and presiding over 52 matches before being dismissed in November 1998. The club were relegated later that season.