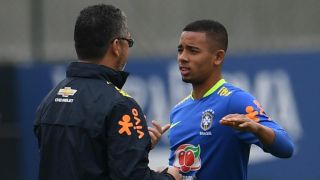 The 19-year-old has been linked with the likes of Inter and Barcelona, representatives from the latter were present when he scored twice in the 2-0 victory over America Mineiro in June.

Fellow Brazilian Neymar has also urged his Olympic team-mate to consider joining him at Camp Nou, but it is Pep Guardiola's side who are reported to be leading the race for his signature.

Gabriel Jesus is believed to have spoken with the City boss over the prospect of joining the club and has now claimed he has informed Palmeiras of where he wants to move and expects a transfer to be concluded soon.

"My future is almost sorted, my family, my representatives and Palmeiras know where I want to go," he told a media conference.

"My focus is solely with the national team, on this gold [medal]. The deal is almost right, but my focus is here. Everything is almost certain."

Gabriel Jesus refused to divulge what was said in any direct discussions with Guardiola, however.

"I do not have to speak about the contact with Guardiola, it is something private, I would like that to be respected," he said.