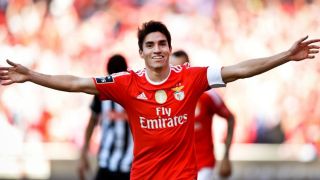 New Atletico Madrid winger Nicolas Gaitan says he wanted to complete his move to the Vicente Calderon 12 months ago.

The Argentina winger ended his six-year association at Portuguese giants Benfica by agreeing a move to the Spanish capital last month.

Gaitan spoke of his delight at securing a switch to LaLiga and claims he would have been in Spain even sooner had a deal been struck.

Asked why he had not moved earlier, Gaitan responded: "Because there was no agreement between the clubs.

"I can make a decision, but if they do not reach an agreement then a deal does not depend on me."

Atleti are known for putting in the hard yards on the pitch under head coach Diego Simeone.

And Gaitan concedes he will have to adapt to the physical demands of playing under his compatriot at the Calderon.

"I am coming from Portugal where we are not used to the physical [side of the game], we worked more with the ball.

"I do not know what I will find, but I hope to adapt quickly. I will adapt to what the coach asks me and I hope to live up to [his expectations]."