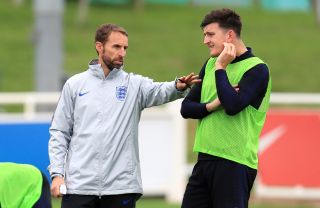 The 27-year-old was the main talking point on Tuesday afternoon when the Three Lions boss named him in his squad, despite an ongoing court hearing on the Greek island of Syros.

Maguire was arrested along with two others, including brother Joe, in the early hours of Friday after an alleged incident in Mykonos, with the defender appearing at a hearing the following day in neighbouring Syros.

The world’s most expensive defender was not at the subsequent court case on Tuesday, when he was found guilty of assaulting a police officer, swearing, resisting arrest and bribery by a Greek court.

The verdict and 21-month suspended prison sentence came just four hours after the England international was called up by Southgate, who had phoned the centre-back to ascertain the facts.

But the conviction – something Maguire vowed to appeal against – has led the Three Lions boss to pull the defender out of the squad for next month’s Nations League double-header against Iceland and Denmark.

“In light of this evening’s developments, I can confirm I have withdrawn Harry Maguire from the England squad for the matches against Iceland and Denmark,” Southgate said in a statement.

“As I said earlier today, I reserved the right to review the situation.

“Having spoken to Manchester United and the player, I have made this decision in the best interests of all parties and with consideration of the impact on our preparations for next week.”

While Maguire says he and his two co-defendants remain “strong and confident regarding our innocence in this matter”, Southgate’s decision to initially select him in these circumstances is sure to be pored over in the coming days and weeks.

“I have spoken with Harry. I have the insight to the story, which is very different to what’s being reported.

“And in these instances, I think you can only make decisions on facts that you’re aware of.

“Now clearly if facts change further down the line or information changes, then I have to review that decision.

“But I have a fantastic relationship with the boy. Harry has been an outstanding character for us.

“I have no reason to doubt what he’s telling me and, you know, it’s important that he knows that he’s got my support at this moment.”

Asked if Maguire could be dropped from the squad if found guilty, Southgate said: “Well, I’m not going to get into hypotheticals of what might or might not happen but, as I said, I’ve got to reserve the right to review if further information becomes available.

“I think whenever you’re in a management position, you have to make lots of decisions and you always make decisions to the best of your ability given the information that you have.

“People might agree or disagree with those decisions but, you know, I think that’s the position every manager finds themselves in and at this moment in time that’s where I am with it.

“As I said, Harry regrets the fact that he’s brought that sort of focus and attention on the team and he apologised for that.

“But he also has his own side of the story that I think will come out in time.”

Southgate would not offer insight into what Maguire said because of the ongoing legal situation but was more forthcoming about his personality, saying he has been “absolutely outstanding” for England and a “delight to work with.”

The England boss added that “this is clearly a situation that none of us are enjoying” – highlighting the difficulty for the centre-back and his family at a time when so much is under scrutiny.

“Well, I think we recognise that if you’re a player with England, that has a profile, and there are expectations and there was also attention and focus that goes with that,” Southgate added in the virtual press conference.

“Clearly if you’re the captain of a club like Manchester United, that’s the same, so he’s fully aware of that.

“And, you know, I think it’s the same for all of our players, really. We know that there’s a responsibility in wider society.”