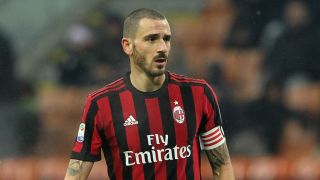 Gennaro Gattuso says AC Milan will do everything possible to keep Leonardo Bonucci as Paris Saint-Germain reportedly step up their transfer pursuit of the Italy defender.

Bonucci's future at San Siro is the subject of intense speculation, with Manchester United also rumoured to be keen on luring the centre-back to Old Trafford.

The Rossoneri captain, who arrived from Serie A rivals Juventus 12 months ago, shrugged off the distractions to play 68 minutes in a 2-0 friendly win over Novara on Friday as Milan opened their pre-season campaign.

Gattuso praised the 31-year-old's attitude while admitting Bonucci is yet to fully commit to the club.

"Leo is a great professional and an incredible player, and at the moment we have to listen to what he and the other players say," Gattuso told reporters.

"We have to respect the choices of the players. Obviously he wants to win but we also want to win. We will wait and see because he is an important player that we want to keep at all costs."

The result, which included a first outing for Nikola Kalinic since finalists Croatia sent him home from the World Cup, capped a day of good news for the Serie A side, who earlier had their Europa League status reinstated by UEFA.

The club successfully appealed to the Court of Arbitration for Sport (CAS) after their qualification was stripped by European football's governing body due to Financial Fair Play (FFP) breaches, a decision that was welcomed by Milan's new owners.

"Elliott is pleased that we were able to support AC Milan at the CAS and that our intervention was able to achieve a positive result for the club," a club statement said.

"Playing in Europe is part of the heritage of AC Milan and to have been excluded would have been a shame. We will now work hard to rebuild the credibility of the club with UEFA and show that we can succeed on the pitch while respecting UEFA FFP rules.

"Today's legal victory is an important first step in the rehabilitation of AC Milan. This rehabilitation will not be an overnight project, and there is a great deal of hard work ahead which Elliott is ready for."