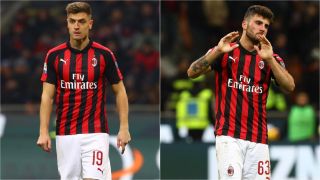 The Rossoneri failed to score for the fifth time in their last seven league matches on Saturday as Carlo Ancelotti's side claimed a 0-0 draw at San Siro.

New signing Piatek, who arrived from Genoa this week for a reported €35million, came off the bench for Cutrone after 71 minutes but was denied by a good David Ospina save with his only clear chance.

Despite watching his side draw a blank for the third time in four league games at home, Gattuso is not yet prepared to sacrifice a midfield player for an extra forward.

"Yes, but not right now," he told DAZN when asked if Piatek and Cutrone could play together. "I don't like getting pinned back with a line of four in midfield. You risk losing too much space.

"They won't play together for now because there's an issue of getting balance in the team. When we used two strikers, we were too unbalanced."

Gattuso was content with a share of the spoils, even if he was frustrated by some of Milan's play in the attacking third.

"We played against a fantastic team and did well in the first half, even if we seemed to go missing in the last part of the pitch," he said.

"Napoli are an opponent who always keep you on your toes and had all their forwards out there. We were getting stretched in the second half and struggled with fatigue, but I am happy with a point.

"We often lose our way in the final third, getting the final ball wrong, which is a real problem. We are doing a lot of work on it in training."