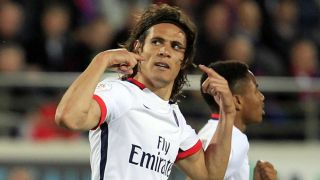 Edinson Cavani scored a hat-trick as Paris Saint-Germain broke the Ligue 1 points record with a 4-0 win at Gazelec Ajaccio.

PSG had already equalled the previous record of 89, set by themselves in 2013-14, but Cavani's treble moved them onto 92 points with two games left to play.

Cavani scored the only goal of a low-key first half but doubled his tally four minutes into the second, with Angel Di Maria providing the assist for both.

A third followed two minutes short of the hour mark before Zlatan Ibrahimovic got in on the act with a late fourth.

The result, combined with Toulouse's 1-0 victory over the already-relegated Troyes, sees Gazelec drop into the relegation zone, although Reims' defeat by the same scoreline in Marseille ensures just one point separates the three sides heading into a crucial final round of fixtures.

Both sides made a slow start at the tiny Stade Ange Casanova, but it was predictably PSG who made the breakthrough after 13 minutes.

Goalkeeper Clement Maury rushed off his line to meet a Di Maria cross from the right, getting nowhere near the ball and allowing Cavani to head home.

Di Maria looked hurt after going down under the challenge of Kader Mangane but was able to carry on, and Gazelec had to wait until the 24th minute for their first sight of goal, Roderic Filippi heading wide of the right-hand post.

Di Maria was central to much of PSG's play in the first half and almost added his name to the scoresheet with an audacious, perhaps inadvertent, free-kick attempt that sailed over a backtracking Maury and bounced behind off the top of the crossbar.

Mangane drew the ire of PSG once again when he clashed with Cavani in the box and referee Mikael Lesage waved play on, but the Uruguayan would add to his tally early in the second period.

Di Maria was again the provider and Cavani beat defender Alassane Toure with his first touch before slotting past Maury.

Ibrahimovic had a quiet first half but felt he should have had a penalty when stopped in his tracks by an uncompromising Issiaga Sylla challenge shortly after Cavani’s second, and almost added a third after teeing himself up for a header that went just wide.

Cavani's hat-trick was complete when he was allowed to wander unmarked into the Gazelec penalty area and head in a Layvin Kurzawa cross, before being immediately withdrawn by coach Laurent Blanc - a solid return for an hour's work.

Gazelec, who now need a result from their season-closing trip to Lorient, saw a Khalid Boutaib effort headed off the line by a stooping Thiago Silva late on, before Ibrahimovic rounded off the scoring with his 35th Ligue 1 goal of the season.