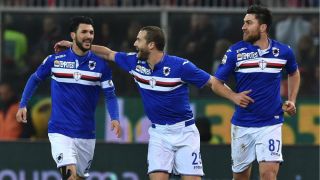 Roberto Soriano scored twice as Vincenzo Montella guided Sampdoria to a nervy 3-2 triumph against Genoa in the Derby della Lanterna.

Sampdoria snapped a six-match Serie A winless streak in the final game before the mid-season break and picked up where they left off, with Eder also on the scoresheet before Leonardo Pavoletti set up a tense finish with a double of his own.

It marks a promising start to 2016 for the visitors, who climb to 10th, but Genoa remain in trouble at the wrong end of the table, two points above the bottom three and without a win since November.

Soriano volleyed in the opener after 18 minutes following a failed clearance, while further unconvincing defending allowed Eder to steer home from inside the box just before the interval.

Gian Piero Gasperini's men had barely settled into the second half when excellent work from Antonio Cassano created another opening for Soriano to put Montella's men three up.

Pavoletti pulled one back with a header from Diego Laxalt's corner and Darko Lazovic missed a superb chance soon after as Genoa finally applied some pressure.

The gap was cut to one courtesy of Pavoletti's chip-and-header finish in the 81st minute, but Sampdoria held firm to remain unbeaten in the past four derbies against their local rivals.