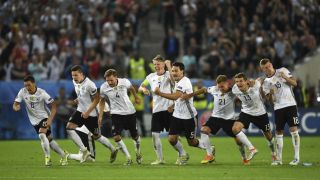 Germany won a dramatic penalty shootout 6-5 to book a place in the Euro 2016 semi-finals and send Italy crashing out in Bordeaux.

After 120 minutes of action ended in a 1-1 draw, Manuel Neuer saved from Matteo Darmian in the shootout's decisive moment, with Jonas Hector netting the winning spot-kick.

Simone Zaza, Graziano Pelle and Leonardo Bonucci all missed too in an unbelievable sequence of penalties, with unsuccessful efforts from Thomas Muller, Bastian Schweinsteiger and Mesut Ozil going unpunished for Germany.

Ozil looked to have put Germany on course for victory in regulation time, but Bonucci's late penalty – after a handball from Jerome Boateng – ensured the game progressed to extra time and then spot-kicks.

The thrilling win helped Germany gain a measure of revenge for a run of eight consecutive games without victory against the Azzurri in major tournaments, including a semi-final loss four years ago in this competition.

The world champions are now the first team to make the last four at six consecutive major tournaments.

Joachim Low's side will face hosts France or Iceland in Marseille on Thursday when they will bid to make it to a record seventh European Championship final, although Mats Hummels will miss the match through suspension.

Germany switched to three at the back with Benedikt Howedes replacing Julian Draxler, but they suffered a blow when Sami Khedira limped off after only 16 minutes as captain Schweinsteiger came on to replace him.

Schweinsteiger, whose outing saw him equal Miroslav Klose's European appearance record at major tournaments, had a goal disallowed for shoving Mattia De Sciglio to the ground before getting on the end of Hummels' cross and planting a header beyond Gianluigi Buffon.

The world champions had the best chance of a quiet first half when Muller scuffed a presentable opportunity straight at Buffon, and the Bayern Munich man was denied by a flying Alessandro Florenzi on the goal-line shortly after the interval.

But the breakthrough did arrive with 25 minutes remaining when Mario Gomez slipped a pass through to Jonas Hector down the left and his cross deflected off Bonucci, allowing Ozil to stab home from eight yards for his first goal of the tournament.

Italy stayed in the game when a magnificent reaction save from Buffon prevented Giorgio Chiellini's tackle on Gomez from flying into the net, but Boateng gave them a lifeline after 77 minutes.

Boateng inexplicably raised his hands to block a Chiellini flick and referee Viktor Kassai immediately pointed to the spot.

Bonucci had not scored for his country since September 2014, but he confidently found the bottom-right corner from the spot despite Neuer guessing correctly as he conceded for the first time in the competition.

Germany substitute Draxler came closest to finding an extra-time goal when his flick narrowly missed the target before he over-hit a pass when he could have released Muller on the break a few moments later.

After both teams scored their first spot-kicks, unbelievable drama ensued.

Zaza had been brought on in the final seconds of extra time to take a penalty, but he blazed over after a bizarre run-up, before being relieved to see Buffon immediately save from Muller.

Andrea Barzagli's successful conversion was then followed by Ozil striking the post, but, astonishingly, Pelle tamely struck wide to allow Draxler to level the shoot-out.

Bonucci was then thwarted impressively by Neuer, giving Schweinsteiger the chance to seal victory, only for the captain to incredibly shoot way over as the first five penalties ended with the scores level at 2-2.

Darmian, Italy's ninth taker, was then thwarted by Neuer and Hector stepped up to score low under Buffon - who left the pitch in tears - and send Germany's players wild.

- Ozil has now netted three goals against Italy, against no side has he scored more (also three v Austria and Faroe Islands).
- Germany conceded their first goal of EURO 2016 after 438 minutes of action.
- It was also the first goal conceded in a major finals competition in 558 minutes of action (since Oscar scored in the 90th minute of Germany’s 7-1 win against Brazil at WC 2014).
- 17 of the 20 goals scored in Germany and Italy’s nine encounters at major tournaments have come after half-time (85%).
- Thomas Muller was the first German player to miss a spot-kick in a major finals shooutout since Uli Stielike v France in the 1982 World Cup.
- Germany missed more penalties (3) in this shootout as in their previous major finals shootouts combined (2).
- Germany have won their last six major tournament shootouts.