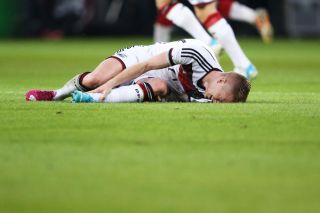 Reus was helped off the field in visible distress during the first half of Germany's 6-1 win over Armenia in Mainz on Friday.

The 25-year-old appeared to twist his left ankle in a challenge with Armenia midfielder Artur Yedigaryan.

Germany went on to win the game in emphatic fashion, with striker Miroslav Klose surpassing Gerd Muller as the country's all-time record scorer by grabbing his 69th international goal.

Yet a flurry of second-half goals did little to lift the mood after Reus' setback, just six days before the start of the World Cup.

"Marco is having an MRI scan," Low told ZDF. "We have to wait.

"We have already seen that his ankle is swollen. Hopefully it's not the ligaments.

"We can only hope that he will be OK. But it looked bad.

"We can call up another player until 24 hours before the first game."