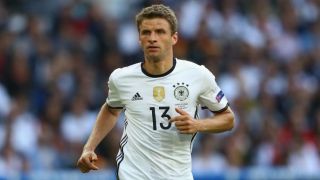 Thomas Muller insists Germany are "not scared" of France and dismissed their five-goal haul in the quarter-finals as being partly due to poor Iceland defending.

The world champions take on the Euro 2016 hosts at the semi-final stage in Marseille on Thursday with France looking to demonstrate again the firepower which saw them beat the tournament surprise package 5-2 at the weekend.

And while Muller – who has yet to score at the Euros – has respect for France, and their offensive players in particular, he is confident Joachim Low's men can find a way to combat them.

"We are not scared of them. We've seen the videos and we know that France have got many good individuals," he said.

"The goals they've scored against Iceland were individually very nice, but the Icelandic defence didn't look too good.

"We are focused on not letting their strikers get near our box.

"France didn't reach the semi-finals just by luck. They did it because they have good players. We have respect, but we,re optimistic that we will find the right solutions."

The absences have led Germany team manager Oliver Bierhoff to declare his side the underdogs.

He said: "I see France as small favourites now.

"They did not have to play 120 minutes in the quarter-finals, they will play in front of 62,000 of their own fans in Marseille and we have several missing players, not least those who are already at home like Antonio Rudiger, Ilkay Gundogan and Marco Reus.

"However, we don't have a skeleton team left now. We have players who are ready to go. The team has improved over the course of the tournament. We are ready for that match."

Germany beat France 1-0 at the quarter-final stage at the World Cup two years ago thanks to a Hummels header, but Les Bleus midfielder Moussa Sissoko believes Didier Deschamps' side have evolved since then.

The Newcastle United man said: "We have grown at all levels, defensively, in midfield and attack.

"We have not conceded many goals in this competition and we have shown our many qualities in attack. We will try to keep this momentum going."

If France are to win, they will have to find a way past Germany goalkeeper Manuel Neuer, of whom Sissoko is a big fan.

"He is the best goalkeeper in the world," he added. "We must make decisions quickly in front of goal and try to be more accurate. We know he also plays the sweeper role and it will be up to us to pay attention."

Key Opta Stats:
- France have never kept a clean sheet in their four meetings with Germany at major finals tournaments.
- Germany have reached the semi-finals in each of their last six major tournaments (WC 2006, Euro 2008, WC 2010, Euro 2012, WC 2014, Euro 2016), the longest ever run for a European team.
- Germany have won their last six penalty shoot-outs at major tournaments. Their only failure in this exercise came 40 years ago, in the final of EURO 1976 against Czechoslovakia.
- France are unbeaten in their last 17 major tournament games played on home soil, winning 15 and drawing two. Their last defeat dates back to July 1960 in the inaugural European Championships against Czechoslovakia (0-2).
- France are the top scorers at Euro 2016 with 11 goals in five games.
- Antoine Griezmann has scored/assisted more goals than any other player at EURO 2016 (4 goals, 2 assists).