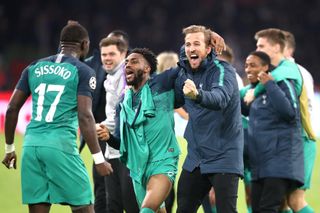 David Ginola believes Tottenham’s stunning journey to the Champions League final has elevated the club into the elite of European football.

Spurs staged a remarkable rally from 3-0 down on aggregate at half-time against Ajax on Wednesday to reach their first ever Champions League final, against Liverpool in Madrid on June 1.

It was another show of Tottenham’s amazing powers of recovery after
Mauricio Pochettino’s side took only one point from their opening three games at the group stage and also trailed Manchester City in the second leg of their quarter-final.

“Every single person now realises that Spurs is one of the clubs to take into consideration,” former Tottenham winger David Ginola told talkSPORT.

“Spurs have got every bits and pieces to be a great club. They have a great training centre, a great stadium, and now they’ve got a great team.

“Pochettino has not spent a penny in the last year-and-a-half, probably the only team that have not spent a lot of money on players.

“This is the reward for stability, players getting to know each other in training, this is how you get results.”

Spurs looked dead and buried at half-time of their semi-final second leg in Amsterdam, 2-0 down on the night, 3-0 overall, and without their injured talisman Harry Kane.

“I could not believe it,” former France star Ginola said. “What an amazing performance, putting so much energy in the game and keeping their faith to the end.

“Pochettino has been criticised so long about not winning any silverware. But his coaching, putting (Fernando) Llorente on, made the whole difference.

"We are making history."#UCL ⚪️ #COYSpic.twitter.com/2CMxspG5Wa— Tottenham Hotspur (@SpursOfficial) May 9, 2019

“This is why Pochettino is a great manager, because he can see when the team is not performing well and he has the ability to change the team in a second.

“When Llorente went on, all the lights went on as well – Son, Ali, Eriksen and Lucas Moura.

“It was the first time in the Champions League this season you saw Ajax struggling.

“They had great performances against Real Madrid and Juventus, but in the second half you could not recognise the players from Ajax.”

Former Tottenham captain Gary Mabbutt told BBC Radio 5Live that the win ranked as one of the club’s greatest.

“European competitions are always extremely special,” said Mabbutt, who made more than 600 appearances for Spurs over 16 years, during which he won both the 1984 UEFA Cup and lifted the FA Cup at Wembley in 1991.

“There have been some great nights over the years for the club.

“It was an amazing night for the club, an historic night which is up there with some of the greatest ever victories the club’s ever had.”

Former Spurs striker Clive Allen added on BBC Radio 5Live: “The second half was just something that I’ve never experienced.

“It was just something that I’ll remember for the rest of my life.

“The club’s making new history, moved into a new stadium and they now find themselves in the Champions League final – it’s just unbelievable.”