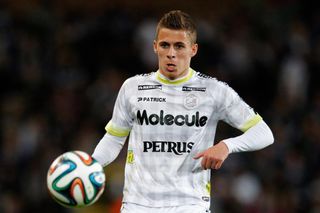 The 21-year-old, younger brother of Eden Hazard, joined his elder sibling at Stamford Bridge in July 2012 from French side Lens.

Chelsea opted to immediately loan Hazard junior to Belgian team Zulte Waregem, where he has impressed during the last two seasons.

Indeed, Thorgan Hazard won the Player of the Year award in the 2013-14 campaign and earned his first senior international cap for Belgium last May.

As a result, the likes of Schalke, Wolfsburg and Gladbach have all been linked with a move for the playmaker, with the latter clubs' sporting director Max Eberl stating that they have struck a deal with Chelsea.

"We were always going to make an attacking signing, no matter what the situation is with (strikers) Luuk de Jong and Peniel Mlapa, and this will be Thorgan Hazard," Eberl told The Rheinischen Post.

"We have exchanged contracts with Chelsea and we have agreed with Thorgan, we have all agreed and now just need to sign the contracts."