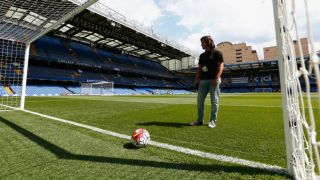 UEFA has approved the use of goal-line technology (GLT) at the European Championship in France later this year.

The decision, announced following the governing body's executive committee meeting in Nyon, means the system will work alongside additional assistant referees who will "continue to monitor all activity in and around the penalty area".

GLT will also be used in the Champions League in the 2016-17 season from the play-offs onwards.

He said: "It's not a decision taken quickly. We went through a long consultation after president Michel Platini told us, one and a half years ago, to investigate whether additional assistant referees and goal-line technology together would have been worth it.

"We implemented the additional assistant referees quite a long time ago and the reason why was to improve the control of the match official on each single incident.

"Monitoring the goal-line was not the main task of the additional referees, they were to control what was going on, particularly inside and around the penalty area.

"This meant they would lose control of what happened when the ball was kicked and the possible goal-line incident. This reduced the possibility for the additional referee to really support the referees in controlling what was going on inside the penalty area. So we were convinced that implementing the GLT would have been a further step in better control of the match.

"We are happy with the outcome of the additional referee's job although we know from outside their contribution is not always appreciated or understood.

"Unfortunately they are like ducks, very relaxed above the water and paddling like hell underneath. Even if they don't show any gestures, as they are not allowed to, they are making decisions and communicating them to the referee."