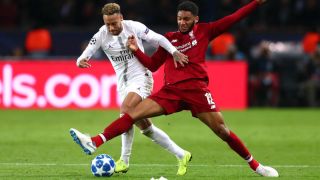 Jurgen Klopp is thrilled Joe Gomez has agreed a new long-term contract at Liverpool, calling it a "smart decision" from both the player and the club's hierarchy.

Gomez has steadily established himself as a first-team regular at Anfield since arriving from Charlton Athletic in 2015, nailing down a place in Klopp's starting XI this term.

The 21-year-old made his England debut last year and has impressed for the Three Lions, though injury robbed him of a place in their World Cup squad.

He sustained another injury in last week's win over Burnley, suffering a lower-leg fracture, meaning he is again set for a spell on the sidelines.

Although Klopp sympathises with Gomez's injury problems, he has no doubts the contract extension - which was announced on Monday - will benefit both the player and the club, with reports suggesting he agreed a six-year deal.

"Since I'm here, the development is incredible, it was only a bit delayed because he was injured when I came in playing for England Under-21s," Klopp told reporters on Monday ahead of the Champions League clash with Napoli.

The moment I found out signed his new deal! Well deserved brother   December 10, 2018

"It was a really serious injury and it took a while until he was back, and then as it is with young players, you need a bit of time to find all your natural strength and football skills again.

"Last year he was brilliant and this year outstanding. The future is bright for him. This injury is pretty much useless in the moment but we know how it is with a broken bone. He needs a bit of patience but then everything will be fine and he can go again.

Gomez's defensive colleague Virgil van Dijk has been similarly impressed with the young England international and is convinced the new contract is a just reward.

"It's well deserved," Van Dijk added. "I knew a few weeks ago.

"He's a great player, he has been showing that for us and for England. He can only get better and I'm delighted for him."