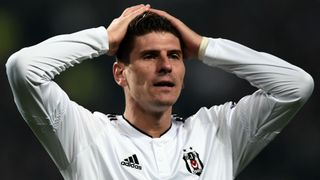 Germany striker Mario Gomez has announced he will not play for Besiktas next season due to on-going political unrest in Turkey.

Gomez joined the Super Lig club on a season-long loan from Fiorentina last term and enjoyed a prolific campaign, scoring 26 goals to help Besiktas to the Turkish title and win an international recall in time for Euro 2016.

The former Bayern Munich player still has a year to run on his deal in Florence and Besiktas president Fikret Orman was hopeful of luring him back for 2016-17.

But the events of last Friday, when a failed military coup against president Recep Tayyip Erdogan left 161 dead according to Prime Minister Binali Yildirim, forced Gomez to re-evaluate.

In post shared across his social media pages, the 31-year-old said there were "no sporting or any other reasons" for a decision that was "completely down to the political situation".

"It was a difficult decision that I had to think about a lot," he explained.

"I have to tell you Besiktas fans personally that it is very heavy for me that I will not be playing for this great club, in front of you wonderful fans, in this unique stadium anymore.

"The reason for this is completely down to the political situation! There are no sporting or any other reasons that have made me make this decision.

"It is purely down to the terrible events that happened in the last few days. I hope you can understand that!

"I [give] huge thanks to the club, to you fans and to all the people with whom my family and I had a lot of wonderful times! It was a fantastic year with the championship providing the absolute highlight."

Gomez did not rule out the prospect of a return to the Istanbul club if the domestic problems in Turkey can be resolved.

He added: "I hope that these political problems can be solved in a peaceful manner soon. Then it would be my great wish to play for Besiktas again!

"The club and the country grew very close to my heart in this past year. Hope to see you again soon."