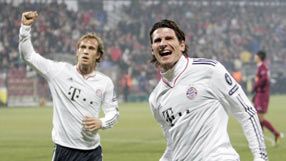 After enduring months of criticism, Gomez helped Bayern advance to the round of 16 with two games to spare in Group E thanks to four wins in their first four games.

With Ivica Olic and Miroslav Klose injured, coach Louis van Gaal, who has mainly left the Bundesliga's most expensive transfer on the bench since he joined from VfB Stuttgart for 30 million euros last year, had no choice but to start Gomez.

The 25-year-old, who was close to signing for Liverpool earlier in the season after failing to clinch a starting spot, got support from club boss Uli Hoeness this week, who criticised Van Gaal for overlooking him as well as other players.

Gomez repaid the trust with a fine performance.

"I think I have played well in other games as well but it seems I am only measured by the number of goals I score," he said. "I am happy to have played tonight and played from the start. It feels good."

Gomez needed only 12 minutes to open his account, firing in from close range after Cluj keeper Eduard Stancioiu saved an Andreas Ottl shot.

The Germany international doubled Bayern's lead on 24 minutes heading in at the far post before adding a third in the 71st minute from inside the area.

Substitute Thomas Mueller completed their victory in the final minute.

"It was a very good win and our positioning was very good tonight," said Van Gaal, barely cracking a smile following his war of words with Hoeness in recent days.

"As for Gomez I think a striker is closer to the goal than any other player and that's how he scores. It is fantastic to have such a player on my team.

"Tonight I am happy and Uli is happy so we will have a drink," said the Dutchman.

The Romanians deserved a goal in the second half after twice hitting the post but Cluj coach Sorin Cartu conceded that the Germans were far more effective.

"This shows the difference. We missed (chances) but Bayern deserved this victory," he said, with his team in third place on three points from four games.

"This is the difference between us and them and we need to accept it. This is a shameful score," Cartu told Romanian state television.