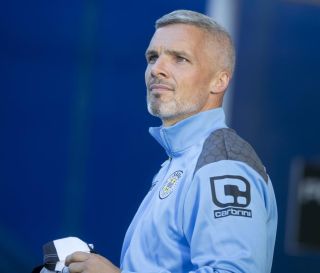 St Mirren manager Jim Goodwin admits his bid to sign Thomas Verheydt is off after being priced out of a move for the Dutchman.

The Buddies boss is looking to add five new faces to his squad and hoped the 6ft 3in Go Ahead Eagles targetman would be the first to arrive.

But Goodwin has now revealed Verheydt has received an offer from his homeland that has blown away the deal on the table in Paisley.

Speaking after his team’s 1-0 Betfred Cup win over Edinburgh City, Goodwin said: “It looks as if it may not happen now. Thomas has had an offer from a club in Holland.

“We felt we were far down the line and made him a good offer but at the last minute, a club in Holland has come in and blown us out of the water, to be honest.

“The big man wants to stay in his home country and his family are settled over there. We’ll continue to try but it looks as if it won’t happen.”

Goodwin has recruited Tony Andreu and Oan Djorkaeff – whose late penalty was enough to give his side victory over City at the Simple Digital Arena – but admits he would have liked to have had more in by this point.

He said: “We’re trying really, really hard to get players in. I know the fans will be as frustrated as myself.

“We have identified some really good players but the problem is when you do that you attract the attention of other clubs. All of a sudden the price becomes very unrealistic. We need to try and be patient.”

“I was really pleased with the players in terms of how they kept going,” added Goodwin. “I can’t fault the lads. Their attitude is great.”