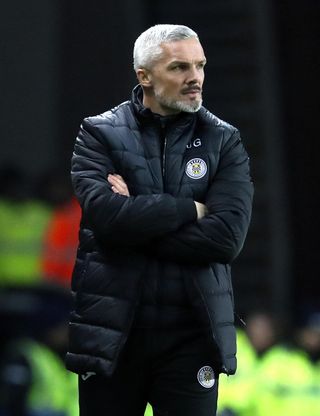 St Mirren manager Jim Goodwin feels his side needs to start turning one point into three if they are to move away from relegation danger.

The Paisley side drew for a third successive match after Ilkay Durmus’ free-kick cancelled out a first-half strike from Hamilton’s David Templeton.

Mickel Miller could have won it for the visitors but dragged his penalty off target. Goodwin conceded a point apiece was probably a fair outcome but wants to see his players to convert draws into victories.

He said: “I think we’ve only had two defeats in our last 10 games and that was to Celtic and Rangers. So we’re not doing a whole lot wrong. We just need to turn these draws into wins. And if we do that we give ourselves a good chance of climbing the table.

“It was the proverbial game of two halves. We were nowhere near good enough in the first half and showed large improvements in the second.

“We were lucky to come in just a goal down. But credit to the players, they showed character and got themselves back in it. We knew it wasn’t going to be pretty, it was a scrappy game. Over the piece a point was merited.”

Goodwin revealed an injury to Ryan Flynn following a foul by Miller does not look as bad as first feared.

He added: “It was a bad tackle on Ryan and we all feared the worst initially as he was writhing around in a lot of pain. Thankfully he was able to hobble off the pitch without a stretcher. It’s too early to call the seriousness of it but it doesn’t look too major just now.”

Hamilton assistant Guillaume Beuzelin praised the influence of Templeton on his first start in his second spell at the club.

He said: “We are very pleased with David. We had a gameplan for him at the top of the diamond and not giving him too many defensive duties. He’s a threat and we’re delighted to have him. He gives us something different as a spark and a creator. It will be a massive add for us.”

Hamilton face a Scottish FA charge for failing to “conduct themselves in an orderly fashion” in Sunday’s match against Celtic, and Beuzelin admitted he was bemused with the decision.

He added: “I was surprised when I heard about that. At the time I can’t remember anything that happened.”