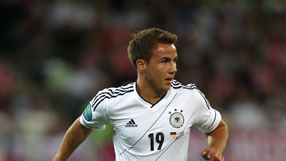 Borussia Dortmund midfielder Gotze was rested towards the end of training on Wednesday, feeling the effects of a minor muscle injury. Arsenal winger Podolski is recovering from an ankle injury and both players missed training on Tuesday.

"Today was the first day that every player was there," Flick told reporters.

"Yesterday Lukas and Mario received treatment. Lukas Podolski had some problems with his ankle, Mario with some muscle problems. We decided to spare him towards the end of training today when it became a bit more intensive.

Flick said the depth of Germany's squad allowed them to easily adapt to any changes.

"Even despite the missing players we can handle any absence because of our team's strength."

Germany are looking to make it three wins in three qualifiers in Dublin before heading back to Berlin for a match against Sweden next Tuesday.

Flick said his team has been practising defensive plays, knowing that the Irish would be looking for chances of a quick break.

"Our focus is absolutely the defence. We have been working on the basics which at times have not worked that well in the past," said Flick.

"Defence starts from attack and we need to be compact. We need to have order and move well. Our offensive players will also need to do a lot of defensive work and we have been training in that."