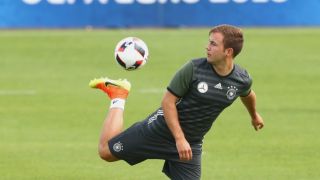 The return of Mario Gotze to Borussia Dortmund could be confirmed on Thursday, Bayern Munich CEO Karl-Heinz Rummenigge has suggested.

The Germany international has long been linked with a move back to Signal Iduna Park, with Rummenigge confirming last Sunday that talks had taken place between the clubs.

Dortmund CEO Hans-Joachim Watzke said this week that a deal had not yet been concluded, but Rummenigge has revealed that an update on the 24-year-old's future is expected in the next 24 hours.

Speaking ahead of Bayern's friendly match with Manchester City on Wednesday, he told ZDF: "I think everything could be solved tomorrow."

Rummenigge said last weekend that he was not surprised to see Gotze, whose contract expires next year, wishing to leave a club he joined in 2013.

"Gotze has been at Bayern for three years and it did not work out for him," he told Sport1. "I am not surprised that Gotze wants to leave. He is 24 and needs to play regularly."

Gotze made just 14 Bundesliga appearances last season, though a number of injuries hampered his chances for more playing time under Pep Guardiola.

He has won three league titles, two DFB-Pokals, the UEFA Super Cup and the Club World Cup since moving to the Allianz Arena in a €37million deal.