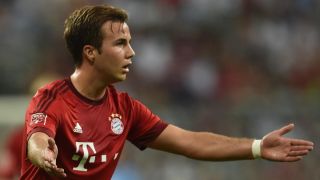 Mario Gotze has suggested he would be open to a transfer away from Bayern Munich at the end of the season if the right opportunity arises.

The Germany international has been linked with a January move to Liverpool - where he would be reunited with former Borussia Dortmund coach Jurgen Klopp - but sporting director Matthias Sammer quickly made it clear Gotze is going nowhere.

However, the 23-year-old has hinted he could be on the move come the end of the 2015-16 campaign, depending on new coach Carlo Ancelotti's plans with him.

"Everything is still open. We will see how things go at the end of the season," Gotze told Sport Bild.

"I have a contract until June 2017. But of course, it is important how the new coach feels about me. The coach's plans are decisive in the end.

"So we will just have to wait and see how things pan out. I have not really given my future much thought recently because of my injury, but everything is open as things stand.

"It all depends on the plans of the club and the new coach."

Gotze, who is currently recovering from a groin injury, has scored four goals in 11 appearances in all competitions for Bayern this term.