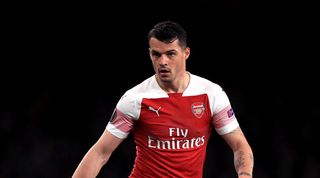 Arsenal’s players have given Granit Xhaka a vote of confidence by backing the under-fire midfielder to remain as club captain.

Xhaka appeared to swear at Arsenal fans when he was substituted in the second half of Sunday’s 2-2 draw with Crystal Palace.

The midfielder then cupped his ear to the jeering supporters as he exited the pitch, before taking off his shirt and heading immediately down the tunnel.

Xhaka’s future at the Emirates Stadium has been cast into doubt after the incident, but The Times report that he retains the support of his team-mates inside the dressing room.

The Arsenal squad initially selected the Switzerland international to be club captain in a ballot held last month.

The vote decided which five players would be part of the team’s senior leadership group, with Xhaka followed by Pierre-Emerick Aubameyang, Hector Bellerin, Alexandre Lacazette and Mesut Ozil.

Unai Emery received some criticism for delegating the decision to his players, but Xhaka also skippers his national team and is respected among his colleagues.

However, Emery is torn over whether or not to strip the former Borussia Monchengladbach man of the captaincy after his outburst at the weekend.

The Gunners boss refused to comment on the situation ahead of his side’s clash with Liverpool in the fourth round of the EFL Cup on Wednesday.

Xhaka is expected to be fined following a meeting between Emery and Edu, the club’s technical director.

But the playing squad have made it clear that they want Xhaka to continue as captain, and Emery fears a backlash from the dressing room if he decides otherwise.

The former Sevilla manager tends to heavily rotate his team for EFL Cup fixtures, which means he is likely to leave Xhaka out of the side to face Liverpool at Anfield.

Arsenal return to Premier League action against Wolves on Saturday, but it is not yet clear whether or not Xhaka will be involved.