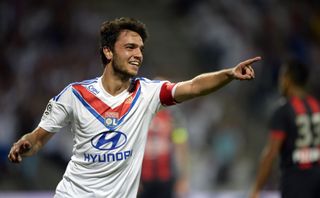 The France international was heavily linked with a move to St James' Park, with Newcastle manager Alan Pardew stating on Thursday that talks were "ongoing".

However, the 23-year-old, who would likely have acted as an ideal replacement for Yohan Cabaye following his move to Paris Saint-Germain from Newcastle, insists he never considered a move away from the Stade de Gerland.

"I had no intention of leaving this winter. There is still a lot of goals with Lyon," he said.

Lyon sit sixth in Ligue 1 and remain in the running for Coupe de la Ligue and Coupe de France glory, with Grenier eager for the club to keep their top performers and taste success this season.

"It would be great to have everyone at the end of a season that promises to be exciting," he continued.

"Alex (Alexandre Lacazette) and Bafe (Bafetimbi Gomis) are on form. They are skilful and they make defensive efforts.