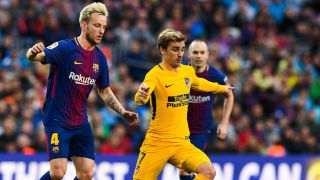 Antoine Griezmann will have the final decision over a potential move to Barcelona, Atletico Madrid president Enrique Cerezo has confirmed.

Griezmann has long been linked with the Liga champions, Atleti reporting Barca to FIFA for an alleged illegal approach in December.

And after Barca striker Luis Suarez suggested in an interview that Griezmann joining the Catalan giants for next season is a formality, Atleti chief executive Miguel Angel Gil Marin issued a furious statement on Monday.

"We're fed up with Barcelona's attitude," the statement read.

"That a president, player and a board member speak the way they've done about the future of a player with an existing contract - and just a few days before contesting a European final - is an absolute lack of respect towards Atletico Madrid and its fans."

However, Cerezo accepts the club could be forced to sell the France forward if he decides he wants to move to Barcelona, or elsewhere.

"I see him [doing] well, both on and off the field," Cerezo told Marca.

"Antoine Griezmann is a player of Atletico Madrid and the future has to be decided by him. Our idea is for him to continue here.

"He is a great player, who forms with [Barcelona's Lionel] Messi and Cristiano Ronaldo the most important trio of footballers of the world.

"We are proud to have him. We will do everything possible for him to continue with us, but not just Griezmann... [goalkeeper Jan] Oblak, everyone."

While the future of Griezmann is in doubt, Atletico favourite Fernando Torres is certain to leave the club at the end of the season.

"Fernando is a person that Miguel Angel and I especially wanted," Cerezo added. "He's part of the history of Atletico Madrid.

"He started with us, he triumphed with us, he left and he came back. Of Fernando we can only speak wonderfully well. He is a guy loved by everyone.

"I thank him from my heart for the years he has been with us. Against Eibar he will say goodbye to the fans and they will respond as he deserves."