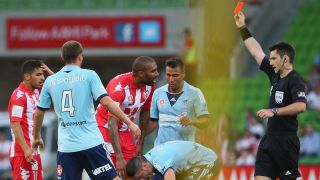 Griffiths was shown a red card after the full-time whistle of Saturday night's 2-2 draw with Western Sydney for abusing referee Ben Williams.

The veteran attacker was hit with a mandatory one-game ban, plus an additional match for the "use of offensive, insulting or abusive language and/or gestures against a match official."

While Griffiths will definitely miss this weekend's home encounter with Wellington, the club may opt to fight the ban for the second game, which is away to Brisbane Roar.

Jets coach Clayton Zane hinted after the Wanderers clash the club may fight any sanction handed down Griffiths.

"I chatted to him (Griffiths) and he said he was in dialogue (with the ref) and he didn't think it was a red card," Zane said on Saturday night.

"So the club may want to appeal that just based on a little bit of leniency and common sense I guess."

Melbourne Heart marquee man Orlando Engelaar was suspended for one game for his poor tackle on Sydney FC's Hagi Gligor on Friday night.

The Dutchman was also shown a straight red for his lunging first-half tackle, and will miss the Heart's home clash with Perth Glory on Sunday.