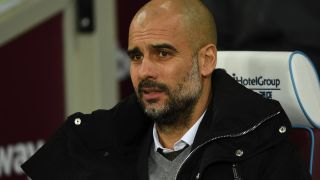 Ahead of hosting Swansea City on Sunday, Guardiola's team are fifth in the table and a distant 13 points behind leaders Chelsea.

City have several players over the age of 30, including the likes of Yaya Toure, Pablo Zabaleta, Fernandinho, Aleksandar Kolarov and David Silva, in their squad.

Guardiola said it would take time for him to make the necessary changes, unwilling to be drastic in his approach.

"It cannot be possible to change it overnight. It's impossible," he told a news conference.

"Firstly, it's not possible and the other thing is it's not good."

Guardiola talked up the importance of his veterans, however, saying they were crucial for the spirit at the club.

But the Spaniard also warned change was coming, saying: "We realise we have a lot of players over 30.

"For example, the full-backs are 31-32, but they are so important so we cannot change absolutely everything in one season. They are the basis.

"I can understand how important Yaya is now, how important Kolarov is, the personality of Pablo in the locker room and the problems he played with against Barcelona.

"In the end, the heart and soul of the team is the old players, the people who know the club. Sooner or later, the process is going to change."