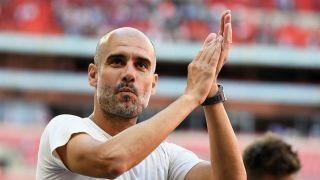 The Premier League champions scarcely looked in need of new recruits as they breezed to a 2-0 win over Chelsea at Wembley in Sunday's Community Shield.

Indeed, Jorginho struggled in the beaten XI on his competitive debut for Chelsea having opted for a swift reunion with ex-Napoli boss Maurizio Sarri, despite being courted at length by City.

Since the Italy international moved to Stamford Bridge, City have been linked to a succession of high-end alternatives from Juventus' Miralem Pjanic to Real Madrid's Mateo Kovacic and Paris Saint-Germain's Marco Verratti.

Guardiola explicitly distanced himself from a move for Pjanic during City's pre-season tour of the United States but, speaking after the win at Wembley, he confirmed an unnamed midfielder is in his sights.

"I don't know. We are trying," he said when asked whether Riyad Mahrez would be joined by another major arrival in this window.

"We would like to find maybe one more because we don't have two specific players to substitute Fernandinho.

"But if he doesn't come, there will not be anyone else. I don't know [if we are close]. I was focused on the final, so we will just see."

John Stones slotted into the holding role in front of the back four during the closing stages against Chelsea – an alternative Guardiola suggested he might revisit if the mystery man does not arrive – but it was City's attacking midfielders who stole the show, supplying the ammunition for Sergio Aguero's match-winning brace.

Guardiola hailed Bernardo Silva's performance as "a masterpiece" and Phil Foden was given a standing ovation after a display that hinted at a breakout campaign for the 18-year-old playmaker.

"Phil is part of the team," the former Barcelona and Bayern Munich boss added.

"Last year was his first season playing with us and training with us. Now he is more mature and part of the first team.

"When he deserves and we believe he should play, he's going to play. Which is good - he is a Manchester City fan, [so are] his family. The people love him.

"In pre-season he played with a lot of heart and courage. He did really well and with more time will be a football player for Manchester City for a long, long time."