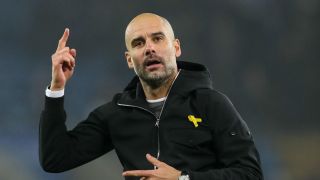 Guardiola on Monday accepted an FA charge of "wearing a political message", putting him in breach of the organisation's kit and advertising regulations.

The City boss began wearing the pin in support of pro-independence politicians Jordi Cuixart and Jordi Sanchez, who were imprisoned as part of the crackdown that followed last October's referendum in Catalonia and remain in custody.

Over the weekend Glenn refuted Guardiola's viewpoint that the ribbon was a humanitarian symbol as opposed to a political one, but the remarkable nature of the FA chief's response courted controversy.

"We have re-written Law 4 of the game so that things like a poppy are okay," he said. "But things that are going to be highly divisive, and that could be strong religious symbols, it could be the Star of David, it could be the hammer and sickle, it could be a swastika, anything like [former Zimbabwe president] Robert Mugabe on your shirt, these are the things we don't want."

Glenn, who went on to reference British Eurosceptic political party UKIP and the terrorist Islamic State group in his remarks, issued an apology on Monday after the UK's Jewish Leadership Council labelled them "offensive" and "ill-judged".

"You say extraordinary comments," Guardiola said, with a chuckle, when the issue was raised at a news conference ahead of the second leg of the Champions League round-of-16 tie against Basel.

"Mr Glenn has apologised, so all is well, but the first impression when I heard that was he does not understand what the yellow ribbon means.

"He made comments that are far away from that. Maybe now he will realise it is not the same.

"It is not about independence or no independence. It is about people who are in jail when they didn't do absolutely anything to be in jail.

"I think now he is going to understand… the comments were because he did not understand the reality. But now I am pretty sure he will."

Manchester City manager Pep Guardiola has admitted an FA charge for wearing a political message, specifically a yellow ribbon, in breach of The FA’s kit and advertising regulations. A paper hearing has been requested, with a date to be set in due course.March 5, 2018

Guardiola will stop wearing the ribbon if requested to as an outcome of the FA hearing and, in a further observation on Glenn's words, he added: "Many times I speak for myself and after I say 'why did I say that?'. I have regrets over what I said. Sometime that happens."

On the eve of defending a 4-0 aggregate lead against Basel, his interest in the matter appeared to have waned.

"Someone informed me 15 minutes before I was here that Mike Riley was here. I did not know it," he revealed.

"He was talking to Txiki… you know better than me.

"But when we talked about tackles, it was not about Manchester City, it was about football.

"There are tackles and there are violent actions. We are defending the players.

"I will speak with Txiki, he will tell me how the meeting was."