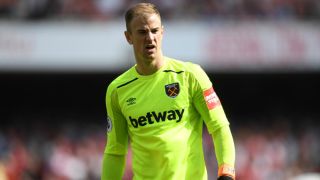 Pep Guardiola says allowing Joe Hart to leave Manchester City was the most difficult decision of his career, as the goalkeeper faces an uncertain future.

Recent reports claim West Ham will not take up their option to permanently sign the on-loan 31-year-old, meaning he could return to the Premier League champions at the conclusion of the campaign.

Hart has lost his place as England's number one during an error-riddled stint with the Hammers and was not entirely convincing at Torino, where he spent last season following Guardiola's arrival in Manchester.

The City boss, who is considering "at most" one or two signings in the next transfer window, revealed his internal conflict over previously sanctioning the departure of a player with more than 250 appearances for the club.

"It was the toughest decision I have ever made as a manager because he was an incredible professional when we were together and I think there is no doubt about his quality," Guardiola said.

"I don't know what's happening [with his West Ham] situation. I think West Ham is going to talk to the club.

"We're going to speak with the club and make the right decision, especially for him."

The terms of Hart's loan deal meant he was forced to sit out the match as City romped to a 4-1 win over the Premier League's 15th-placed side at the London Stadium on Sunday.

Speaking after the loss, Hammers boss David Moyes refuted suggestions his club had already resolved to part ways with Hart.

"There are no decisions about anybody until after the season when hopefully we're safe."