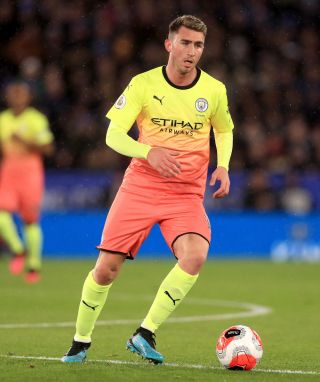 Pep Guardiola is confident Aymeric Laporte is ready to play 90 minutes against Real Madrid on Wednesday night despite the defender asking to be substituted during Saturday’s 1-0 win at Leicester.

Laporte was replaced by Nicolas Otamendi after 57 minutes of Saturday’s match, his third appearance since his return from a long lay-off with a knee injury.

Guardiola said there was no fresh injury problem for the Frenchman, but the pace of Leicester’s attack was a tough test for a player still rediscovering his rhythm.

“He asked me to be subbed,” Guardiola said. “He’s not injured. We cannot forget he has been out for four or five months injured. They run a lot, (Jamie) Vardy, Kelechi (Iheanacho), (Harvey) Barnes, they are all so fast.

“It was quite different against West Ham (on Wednesday) where they was only one striker so it was easier to control, but he’s OK.”

Asked if Laporte was ready to play the full match at the Bernabeu on Wednesday, Guardiola simply said: “Yes”.

Laporte has made a gradual return to action from the knee injury suffered against Brighton on August 31.

He played 78 minutes against Sheffield United on January 21 but then did not appear again until Wednesday’s 2-0 victory over West Ham, completing 65 minutes at the Etihad.

City have not conceded a goal while Laporte has been back in action and Guardiola will be keen to have his best defender on the pitch for as long as possible against Madrid.

But for all he has done to shore up City’s defence, Laporte was almost guilty of gifting Leicester the opening goal on Saturday evening, with his loose pass allowing Youri Tielemans to play in Jamie Vardy only for the former England man to see his shot come back off the post just eight minutes in.

Vardy began the season in electric form, scoring 17 goals before Christmas, including a run of netting in eight consecutive games between October 19 and December 8, but he has not scored since Leicester’s 3-1 loss to City at the Etihad on December 19.

Brendan Rodgers was among those convinced that had changed when Vardy initially got his shot beyond Ederson, raising his arms in celebration before seeing the ball strike the upright.

“It was a great pass, a great run, great everything,” Rodgers said. “It was classic Jamie. He’s done everything right, gone across the goalkeeper and with a little bit of luck that hits the post and goes in and it’s a different start to the game.

“He was threatening all night, him and Kelechi (Iheanacho) and then Harvey (Barnes). They were a constant menace and the Man City defenders knew they couldn’t rest.”