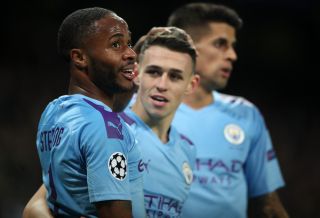 England forward Sterling came off the bench to break the deadlock in the second half and put City on course for a 2-0 victory at the Etihad Stadium that took them to the top of Group C.

Sterling has improved year-on-year under Guardiola at City and his 66th-minute strike was his ninth goal of the campaign. He then provided the late assist for Phil Foden to wrap up the scoring in stoppage time.

City boss Guardiola said: “He’s a player who is always there. He has this talent, he loves to score goals. When crosses come he is always there – you have that feeling.

“I think he can still improve his finishing. Still there is a gap to being even more clinical, but it’s important that all the time he’s there and that’s why he’s been able to score the goals.

“A few days ago he missed chances at Everton but he was always thinking of the next one, and today the pass for Phil was perfect.”

City dominated the opening period but wasted several chances and, without the injured Kevin De Bruyne, were beginning to look laboured until Sterling’s introduction.

Guardiola said: “It was good. We didn’t concede a shot on target. We had huge possession, we created enough chances to score earlier but we were patient. We didn’t let them run. It was a good game.

“We had chances but they defended really well and that’s why it was difficult to score a goal.”

Guardiola was shown a yellow card for his angry reaction to a refereeing decision on a night when City might also have been aggrieved about a couple of VAR penalty calls.

Guardiola, however, refused to discuss the issues.

Dinamo did prove stubborn opponents but coach Nenad Bjelica admitted his side were second best.

He said: “We conceded that first goal in the best phase of our play. We were nervous a lot during the match, making mistakes.

“The home team had a lot of good chances and after we conceded we tried to turn to attack more.

“It was an open match but they are a level above us and they showed that today.”