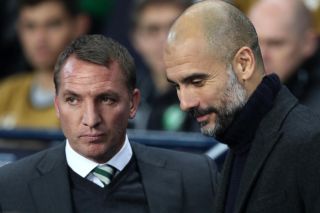 Guardiola is not taking anything for granted against a side who have won five of their eight games under the former Liverpool and Celtic boss.

City manager Guardiola said: “I think Brendan shows his incredible quality as a manager, by the fact that in just two months they are playing the way he wants to play.

“I saw three games and I was really impressed with the way they played. The players know it will be an incredible task for us but, of course, it’s already a final for us.

“And the fact that it’s the last game at home, hopefully people will come and help us and we do what we have to do, which is to win our game.”

Guardiola last came up against a Rodgers side when City faced Celtic in the group stages of the Champions League in 2016-17. Both matches ended in draws – 3-3 on a pulsating night in Glasgow and 1-1 at the Etihad Stadium.

Guardiola expects things to be just as difficult.

He said: “I think there will be high pressing, good build-up, quality in the middle. They are going to attack, like Celtic did here and at Celtic Park.

“He played against Arsenal and even with 11 v 11 they were better. It’s a good side, a really good team.”

City will again be without Kevin De Bruyne, who has missed the last two games with a hamstring injury. Midfielder Fernandinho is a doubt with a knee problem.