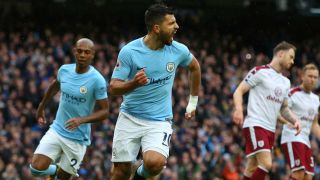 Pep Guardiola hopes dinner will be on Sergio Aguero when he becomes the leading scorer in Manchester City history.

Aguero moved level with Eric Brook on 177 goals at the top of City's all-time list by breaking the deadlock from the penalty spot during Saturday's 3-0 win over Burnley.

It meant a goalscoring return for the Argentina striker, three weeks after he suffered a broken rib in a car accident, and second-half efforts from his compatriot Nicolas Otamendi and Leroy Sane meant City extended their lead at the Premier League summit to five points after Manchester United suffered a shock 2-1 loss at Huddersfield Town.

"When you have three weeks out you take a little bit [of time to get] the rhythm. He needed to play minutes and he did it today," Guardiola told a post-match news conference when assessing Aguero's display.

"It was important for him to equalise the record and as soon as possible he is going to break it. When he breaks it, it will be something special.

"It's so important for him to be the top scorer in all the history with the club. We are happy to be in this moment with him."

Speaking to BBC Sport, Guardiola added: "He should pay a tribute to us! He should invite us to dinner maybe. One more goal... it's going to happen sooner or later."

Burnley's players protested at length after Bernardo Silva went down under a challenge from goalkeeper Nick Pope, persuading referee Roger East to point to the spot.

Guardiola, on the other hand, saw little controversy in the game's key moment.

"Overall, they're a fine side so you can't say that's going to affect the total outcome," he said.

"It's minimal contact, there is contact. I don't know how the ref sees the contact because it's that instant. It's minimal and to get that high off the floor with your arms above your head is almost a skill in itself.

"I was quite impressed actually, by how far he travelled. If I kick my kid in the garden, I don't think he'd fall like that. There's always a moment when I go 'come on'. There has to be a bit of honour within the game."

United's setback at Huddersfield means City are the only remaining unbeaten side in the top flight but Guardiola feels there is little to be gleaned from his team's increased advantage at this stage.

"In May, yes, it will be significant. In October, no," he added.