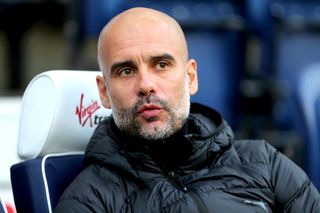 However, the City manager insists the Premier League champions will get on and play their games without complaining.

It was announced on Thursday that, due to TV scheduling, City will kick off against Sheffield United on December 29 just 44 hours after the final whistle in their game against Wolves on December 27.

Guardiola said: “Since I came here every season it’s happened the same. The broadcasters are the bosses in this situation.

“I love to play on Boxing Days, in wintertime, when everybody is stopped and families, kids go into the stadium and enjoy the game. I like it.

Looking at positives, Guardiola did point out that his side will now have a longer rest after their clash with Leicester on December 21, as the Wolves fixture was originally planned for Boxing Day.

He said: “One other day we will have more recovery than the other ones, so it is what it is. It doesn’t matter. We have to play, so we’re going to play.”

City travel to Crysal Palace on Saturday with an opportunity to cut Liverpool’s lead at the top of the table to five points. The Reds are not in action until they face Manchester United on Sunday.

City were beaten by Wolves in their last outing and, having lost a match to Palace last season, Guardiola is wary.

He said: “Since Roy Hodgson took over the team two years ago, with zero points, and he helped avoid relegation, they have always made really good seasons.

“They have incredibly talented players, physical and experienced guys, a lot of talent in the middle and up front.”

Guardiola has respect for the much-travelled former England boss Roy Hodgson, who at 72, is 24 years his senior.

“It is incredible, honestly, 72 years old. You’ve got to have a lot of energy to convince the players, every day, to be there and he does that.”

A word on who might be in contention for #CRYMCI from the boss!— Manchester City (@ManCity) October 18, 2019

City have already lost twice in the Premier League this season but Guardiola has no plans to change his formula.

Speaking at a press conference, the Catalan said: “Every season is completely different, every situation is different, so results right now going bad are not going to change – for any second – my opinion on my team.

“I know exactly what we have to do to come back and to be a team like like we want to be. But it is the past and now how to be focused to to try to increase our our game and play to win games.”

Guardiola said the striker was fine but added: “The car is not!