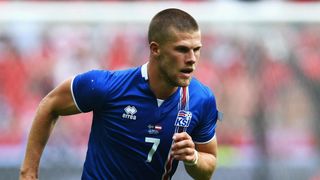 The 25-year-old has agreed a three-year deal with the option of a further 12 months to represent manager Sean Dyche's first foray into the transfer market since steering the Lancashire club back into the Premier League.

Gudmundsson started all five games as Iceland reached the quarter-finals at Euro 2016 and arrives at Turf Moor having assisted more goals (11) than any other player in the Championship last season, although even that was not enough to prevent Charlton dropping down to the third tier of English football.

"Johann we feel is a quality player who we saw last season playing at Charlton in a tough time and we liked the quality he showed," Dyche told Burnley's official website.

"It helps to see a player in the European Championships with that kind of company and he did well there so it was one we all agreed would be a good acquisition for the club and we look forward to working with him going forward."

So happy to have signed for . Can't wait to get started and play in the biggest league in the world July 19, 2016

Gudmundsson, who will link up with last season's Championship top scorer in Andre Gray at Burnley, said: "The atmosphere around the club is fantastic and playing against the team last season I saw just how good the club was – I definitely wanted to join."