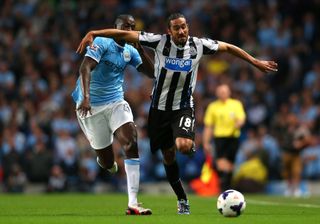 The Argentine winger arrived at Carrow Road on Monday, and could go straight into the squad to face Hull City on Saturday.

But the 30-year-old has been left baffled by his treatment at his parent club, for whom he has only made one start in all competitions this season.

"Maybe that’s a question for him (Pardew),” he is quoted as saying by Norwich Evening News 24. "In December he told me I wasn’t going to play and I had to find a new club.

"I thought it was like not being in the starting XI and that can happe, but then with the FA Cup I thought I might have a chance to be back in and I had to watch from the stands.

"After that I thought it was not a football problem. I don’t know the reason, but it’s done. Now I’m thinking about Norwich.

"I want to be involved, to help the team and I feel the same they are feeling – it’s hard to go into games without a win.

"But for Norwich, there are teams behind us in the league and they have more pressure on them than us.

"And we have to think about that because if we don’t win on Saturday, we can’t think we are finished. It depends on us and we have to do it as soon as possible."