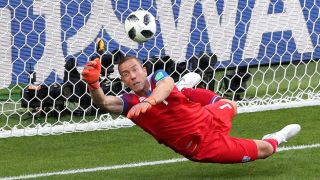 Iceland goalkeeper Hannes Thor Halldorsson has secured a transfer to Qarabag in the Azerbaijan Premier League after saving a penalty from Lionel Messi at the World Cup.

Halldorsson shot to fame when he prevented Messi from finding the net in Iceland's 1-1 draw with Argentina in their World Cup Group D opener, despite that being the high point of his tournament.

The 34-year-old went on to concede five goals in three games as Iceland finished bottom of the group but Qarabag - who twice held Atletico Madrid to a draw in the 2017-18 Champions League - have added him to their squad.

The move brings to an end Halldorsson's two-year spell at Randers, for whom he played 65 games in the Danish Superliga.

Qarabag, who won the Azerbaijani Premier League in 2017-18, are preparing to play Olimpija Ljubljana from Slovenia in the Champions League first qualifying round on July 11.