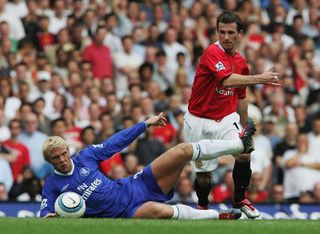 Moyes has the huge task of following on from the remarkable achievements of Sir Alex Ferguson, with the first challenge of his maiden pre-season at the club already overshadowed by conjecture over Wayne Rooney's future at Old Trafford.

Miller knows all about dealing with the demands and expectation at the club, having spent two years at United in 2005 and '06.

He believes Moyes should not try and make too many changes in his first season in charge but admits it will be difficult to deal with the severe spotlight that will be on the former Everton boss.

"It opened my eyes in many ways," Miller told Sportal of the pressure at the club.

"If you're not winning silverware it's considered a failure.

"They are winning trophies year in year out and that's the mandate from the club.

"I don't expect too many changes. He'll (Moyes) put his stamp on one or two things he feels he might do differently but the history of the club and everything else – it will sort of run itself.

"With the players they have there, it should be a good time under the new manager."

The Rooney saga has dominated Moyes' first few weeks in charge, with Chelsea having a bid rejected for the England international despite the club insisting he's not for sale.

Asked about the Rooney situation, Miller said: "I'm old enough and wise enough to know don't believe everything you read.

"He's a massive player for United, a world-class player.

"I'm sure they will be doing everything in their power to keep him at the club because that's where his football is best for him.

"You don't want to weaken your hand and strengthen your neighbours (by selling him to Chelsea).

"I can't see any other place other than United for him but it will be down to the player and the club at the end of the day."

Miller made just 22 appearances for United during his time at the club as he struggled to break into their star-studded first team.

He eventually decided to leave the Red Devils in search of more games and while he admits it was a frustrating time in his career, he has no regrets about his time at the club.

"When i think back I enjoyed every minute of it," said Miller, who takes on his former club as part of the A-League All-Stars squad on Saturday night.

"It was frustrating not getting enough game time but training every day with the players that were there was something special and I'll always remember it.

"Playing with the players there I certainly learned a lot from them both on the pitch and playing in some of the matches I was involved in as well, I look back on it as a good thing."

Miller said he was excited to get the chance to play against his former club again but expects United to be smarting from their shock loss to another All-Stars XI in Bangkok last weekend.

"We're really looking forward to the game but we know it's not going to be easy," he said.

"You see United there in the Premier League every week and know the quality they have.

"Personally and I know the rest of the lads as well, we'll all be wanting to put on a good show and do as best as we can do."