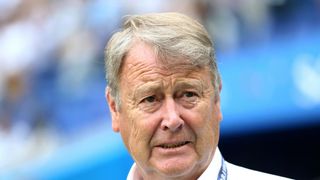 Denmark boss Age Hareide says his supposed criticism of France and Paul Pogba was taken out of context.

Hareide was accused of claiming Didier Deschamps' side were "nothing special" and that Pogba "only thought about his haircut", but the experienced Norwegian insists his words were twisted to create a story.

Denmark go into Tuesday's Group C clash with Les Bleus in Moscow knowing a draw will be enough for them to join France in the last 16 while a defeat would also do if Australia fail to beat Peru.

Hareide said: "Things were taken out of context. If you read the whole article, you would have seen I was comparing this team with the 1998 team.

"You can pick out whatever you like from an article but I was comparing [this team] with the best ever France team in 1998, that's all."

Hareide was quick to make clear his admiration for Pogba and France.

He added: "France has a team with so many good individual players. Their defence is strong and midfield strong with Pogba.

"What he delivers as a player, you can't compare with anything in Europe and then [Antoine] Griezmann at the top - two great players. They are extremely strong."

Hareide will send his players out to win the game at the Luzhniki Stadium, although he will tinker with the tactics to ensure they are harder to beat and tighter at the back.

"I know one point will be enough but that's not a good way to start a match," he said.

"If you put that into your players' heads there will be passiveness in the team and that is not good.

"We know [a draw] will be enough so the way we organise may be different from other matches. We must not leave as much space as we did against Australia.

"We really wanted to beat Australia so we pushed men forward and they had lots of counter attacks. France are very good on the counter with skilful players so we can't play the same way, we need to be strong defensively.

"We need a better balance. We need to be wiser in the way we play because France are a very good team."

Hareide will have one ear on events in Sochi where Australia need a win to stand any chance.

He said: "We will have communication with our guy who is there. My assistant will receive the information and we will know how it's going on an ongoing basis but I don't think I will tell the players."

Christian Eriksen will again be tasked with carrying the Danish threat and Hareide spoke glowingly of the Tottenham midfielder.

"Christian is one of our stars, he singlehandedly got us here with the match in Dublin [against the Republic of Ireland]," he said.

"He's a wonderful guy, a modest person, he's very easy to be around. He loves his football and the more we play the happier he is.

"Off the pitch he is a good influence on the younger players, they look up to him."

Denmark goalkeeper Kasper Schmeichel is pleased qualification is still in their own hands. He said: "We had hoped to be in a situation where we've already qualified but we can still decide it ourselves.

"Had we been offered four points we'd have said 'yes please'. Had we won the last match it would have been easier but as long as we have it in our own hands we are very pleased."