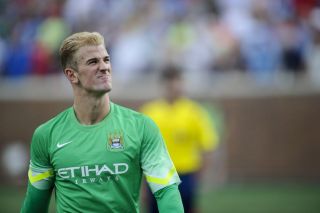 Caballero was reunited with former Malaga coach Manuel Pellegrini in July, with the City boss eager to provide direct competition for Hart in 2014-15.

Pellegrini made it clear Caballero would be in his plans after saying he has "two number one keepers" ahead of the FA Community Shield against Arsenal, which the Argentinean shot-stopper started at Wembley.

However, England number one Hart reclaimed his place in the starting XI as defending champions City opened the Premier League season with a 2-0 victory over Newcastle United on Sunday.

And while he is relishing the challenge with Caballero, Hart has no plans of relinquishing his spot.

"I'll continue to do that. I'll carry on trying to perform to my best and hopefully keeping clean sheets.

"I wouldn't say it's given me an extra edge because I've always had an edge. Caballero is a great signing.

"We were sorry to lose [Costel] Pantilimon to Sunderland and we wish him well but Willy has come in - we know he's a great keeper and what he's done at Malaga. He wants to play as much as I do.

"But I've got the place at the moment and I'm going to do everything I can to keep it. You always want to look to improve - whether it's small margins or big margins."