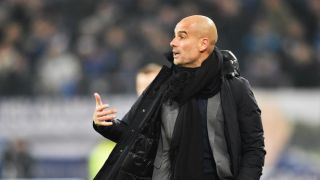 Following the Spaniard’s announcement that he would be departing Bayern Munich at the end of the season, the former Barcelona boss has been heavily linked with a move to City to replace manager Manuel Pellegrini.

Hart admits the club’s players are aware of the current uncertainty regarding Pellegrini’s position but claimed they accept the stories with a pinch of salt.

"It's unavoidable, we all see it, we're not stupid," the England number one told CNN regarding the links with Guardiola.

"At the same time we accept that you hear stuff that is so totally not true everyday about each other or other people or people you know, so, there's a lot of stuff around football, that's why it's such a successful sport and such a big business.

"All of us are in the mindset that stuff goes on around us but our goal is to win things and be involved in the moment."

Hart claims City's under-pressure Chilean manager understands the ruthless nature of the job, and is aware of the expectations that exist at the club.

"He's always said if we don't play well as a team over certain period of time, we'll be moved on, he'll be moved on. That's Manchester City, that's how it works, that's the club we're at. I can't talk for him but he seems to live in the moment.

"He's constantly in contact with the people who matter and we've got titles to win so that's more important on his mind."

Hart remained diplomatic in his reply when questioned whether he would be keen to work under Guardiola – who won 14 trophies at former club Barca.

"I'm sure he'd be a pleasure to play under but right now I'm more than happy to play under Manuel and [England manager] Roy [Hodgson]."