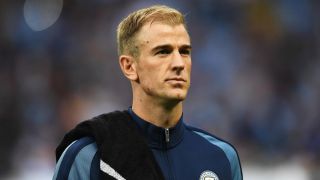 Joe Hart has acknowledged he may need to leave Manchester City permanently to resurrect his career.

Hart has recently had loan spells at Torino and West Ham, but was unable to force his way into Gareth Southgate's 23-man-squad for the World Cup in Russia.

The 31-year-old made his first appearance for City since 2016 in a pre-season friendly defeat to Borussia Dortmund, but says he wants to go to a club where he is the number one goalkeeper.

"I need to go somewhere permanent, I think that’s obvious," he said.

“I did what I did in the previous two seasons because I needed to play to be involved in the World Cup - and look where that got me.

"I’m experienced. I've played at the highest level for a long time and done a lot of things in the game. I need to be an important player at a club and I think that can only happen with a permanent move.

"I’ve got a year left and I’m not going on loan again because my situation has changed. I need to feel part of something.

"It’s difficult when you’re on loan, especially when you’re not a young player who people may have sympathy for. I’m older and being who I am and what I am, I’m there to be shot at."

Hart has made more than 300 appearances for Manchester City since joining the club from Shrewsbury in 2006.