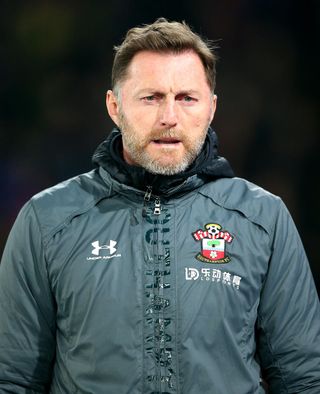 Ralph Hasenhuttl believes football should give up on offside entirely if Arsene Wenger’s VAR recommendations come into effect.

Wenger wants to extend the margin on offside calls “so we don’t say a part of his nose was offside”.

But St Mary’s outfit manager Hasenhuttl has rejected those calls as potentially destructive to the entire offside rule.

“To be honest the only rule that really works in VAR is the offside so far in my opinion,” said Hasenhuttl.

“And we want to change this? I don’t know why.

“It’s the only black-and-white decision which is always right or wrong. The rest is subjective.

“If we change it the way he wants to do it we can stop playing offside because it won’t work any more.

“It will change the game massively in my opinion.

“The only thing that really works well at the moment is the decision about offside. And everything else we must discuss more.”

Southampton will host Aston Villa at St Mary’s on Saturday bidding to get back to winning ways after last weekend’s 2-1 home reverse to Burnley.

And taskmaster Austrian boss Hasenhuttl admitted he has taken time this week to drum into his players the need to turn that home form on its head.

The 52-year-old has challenged his squad to make St Mary’s a “nasty” place for opposing teams to come and play.

“We know about the responsibility we have for this fact.

“It’s important we create an atmosphere that’s not so easy to stand for opponents coming to St Mary’s.

“We need every supporter to give us his voice and help us take this home win.

“We must show every opponent that it’s very, very nasty to play against Southampton on our home ground.”

Tottenham loan defender Kyle Walker-Peters will miss the Villa clash with a calf complaint, while Nathan Redmond and Sofiane Boufal are still sidelined.

“Kyle has a calf injury; it’s not that bad but he couldn’t train this week,” said Hasenhuttl.

“So hopefully he could be back next week. Sofiane Boufal has not trained so far this week.”