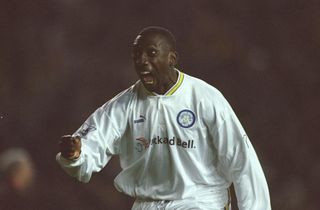 Controversial Leeds owner Massimo Cellino ended Dave Hockaday's tenure as head coach after just six games at the end of last month and Hasselbaink is keen on a possible Elland Road return as his successor, labelling the job as one of the biggest in English football.

The Dutchman had one season in charge of Antwerp before departing in May and has also previously worked in a coaching capacity in the Nottingham Forest backroom staff.

And the 42-year-old would relish the chance to attempt to turn around the Championship club's flagging fortunes.

"Leeds United is a wonderful big club where I had two great years. If they want to talk to me, of course I would talk," Hasselbaink told talkSPORT.

"But what do Leeds United themselves want? That's the most important question. How do they see things? At the moment there are so many things going on they need to sort out first, or maybe they have already.

"But if they want to talk to me, of course I would be interested. Who doesn't want to manage Leeds United? It's one of the 10 biggest jobs in the country."

Hasselbaink was prolific during his two seasons at Leeds between 1997 and 1999, netting 34 goals in 66 Premier League games. He was the joint top scorer in the 1998-99 Premier League season.