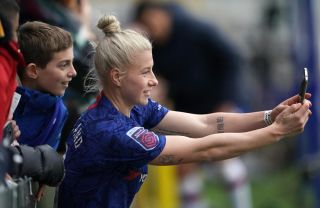 Hayes’ side were 3-0 up within the first 20 minutes following goals from England, Sam Kerr and Sophie Ingle. Guro Reiten made it 4-0 midway through the second half, before Beth Mead broke through for the hosts.

Despite having to wait two WSL games before witnessing the W-League’s all time top-scorer Kerr get on the scoresheet, Hayes was full of praise for England, claiming the Lionesses’ striker scored a ‘worldie’ of a goal.

Hayes said: “I am really happy for Sam but Beth (England) deserves so much credit.

“There has been talk over the years about Jodie Taylor and Ellen White, but that girl is England’s number nine as far as I am concerned.”

Chelsea now trail defending champions Arsenal by a single point with a game in hand but Hayes said: “It’s too early, we’ve all got games coming up and this is a team still to find its consistency.”

Prior to today, Arsenal’s manager Joe Montemurro and his side had won every game at Meadow Park since January last year, losing only to Chelsea during that time.

Once again, the Gunners found the Blues’ defence impenetrable, with Montemurro taking the blame for their poor performance.

He said: “We decided to play with a lot of width and it didn’t work. I take full responsibility.

“The most disappointing thing was we couldn’t even put passes together, something I have never seen in my two-and-a-bit years here.”