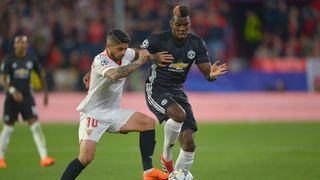 Jose Mourinho saluted the "professionalism" of Paul Pogba for his response to being dropped for Manchester United's draw at Sevilla and subsequently needing "just 10 seconds" to be ready as a substitute.

Pogba has had a difficult few weeks at United, initially being dropped for the Premier League meeting with Huddersfield Town at the start of February and then suffering a similar fate in Spain on Wednesday.

Mourinho had given every indication Pogba was in line to start at the Ramon Sanchez Pizjuan after recovering from illness, but the Frenchman was held back in reserve – Nemanja Matic, Ander Herrera and Scott McTominay starting instead.

But an injury to Herrera – who Mourinho expects to be out for a few weeks – meant Pogba was handed the chance for a reprieve after just 17 minutes and Mourinho believes his response to such disappointment was impressive.

"You saw the game against Sevilla," Mourinho told reporters when asked if Pogba's state of mind was right ahead of Sunday's visit of Chelsea.

The boss on Paul Pogba: “He had a very positive game for us [against Sevilla]. He took just 10 seconds to be ready to come on the pitch, and play and help the team, which he did. He showed great professionalism.” February 23, 2018

"It's always more difficult to come on from the bench than to start. When starting, a player has a different kind of preparation, so to be on the bench and come on even without warming up in the 15th or 20th minute is not easy and I think he had a very positive game for us.

"Sometimes players take five minutes to be ready. They don't have shin pads, strapping, they don't have this or that. He took just 10 seconds to be ready, showed professionalism and in spite of being on bench he was ready to play and he did.

It was also put to Mourinho that Romelu Lukaku could perhaps be accused of not doing well against the bigger sides due to a poor scoring record versus the top six, but the manager dismissed that opinion as nonsense.

"I don't know," Mourinho said when asked if he could explain Lukaku's apparent struggles against big clubs.

"But I'm not worried. Twenty-one goals is not bad at all and I don't measure the performances in the same ways you do.

"I have other points of analysis. I'm happy with his performances even when he doesn't score goals."