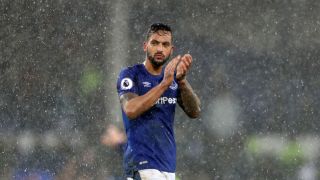 Sam Allardyce plans to take a back seat in the dressing room ahead of Everton's clash with Arsenal to allow former Gunner Theo Walcott to do the team talk.

Walcott's 12-year spell at Arsenal came to an end in January, the England international signing a three-and-a-half-year contract at Goodison Park.

He netted his first Everton goals in Wednesday's 2-1 win over Leicester City and will hope to continue that form on his first return to the Emirates Stadium this weekend.

And Allardyce intends to use Walcott's knowledge of Arsenal ahead of kick-off on Saturday as Everton look to build on their first win of 2018.

| Sam Allardyce has challenged his players to show more consistency ahead of Saturday's trip to . February 2, 2018

"He [Walcott] will be doing the team talk tomorrow," joked Allardyce in his pre-match media conference.

"He's got an opportunity to be a key player at Everton now. He played 30-plus games last season and scored 19 goals.

"He can be a pivotal figure for us going into the future. Hopefully he can have as good a performance at the Emirates as he did Wednesday night."

Everton could also hand a debut to loan signing Eliaquim Mangala in north London, a player Allardyce believes will provide much-needed balance to his side.

I will wear a new blue on my shoulders, I am an Everton player for the rest of the season!I want to wish all the best for Shark TeamI will fight with my new colors to achieve the objectives of Everton February 1, 2018

"His defensive play is very good and he is naturally left-footed, where we haven’t got a natural left-footer at all in the team at the moment," said the Toffees boss.

"So now we have someone who can play down the left-hand side, which will not only be better defensively but will also allow us to create that little bit more.

"You could see on Wednesday that our strength lay down the right. Our left was pretty good but now we have to try and get better in both areas. When you have a naturally left-footed player then you have balance."