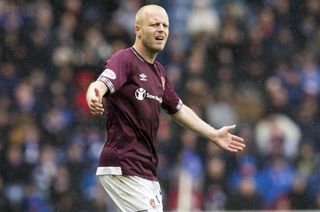 Craig Levein insists getting Steven Naismith tied down for next season is more important than rushing the talisman back for Hearts’ William Hill Scottish Cup final clash with Celtic.

The Scotland attacker is currently ruled out with a knee injury and faces a race against time to be involved in the May 25 clash with the Hoops at Hampden.

But Levein is already preparing to take on Neil Lennon’s triple treble chasers without the 32-year-old.

In the meantime, though, he is pressing on with talks to extend the former Rangers and Everton ace’s Tynecastle stint when his current deal loan deal from Norwich expires at the end of the campaign.

The Jambos manager said: “It will be touch and go whether he makes the cup final or not. We’ve still got a bit of time.

“But the most important thing for me is that we can get Steven signed up on a long-term contract and I want him to be in good health when we start next season. That becomes a priority.

“I’m sure if Steven is capable of playing in the cup final then he will and you know what type of character he is.

“If he can make it then fine, but I’m not relying on it and we’re prepared to play without him. If he makes it then it’s a bonus.

“I wouldn’t gamble on his fitness. There are things you can risk but then make worse, a lot worse.

“Certain injuries you can do (take a gamble) with – this isn’t that type of injury so the chances of us taking a risk are pretty low.

“The worst outcome is pretty bad so I don’t think it’s worth that, particularly if he’s going to sign here long term.”

But even if Naismith does fail his fitness battle, Levein stressed he will still have an important role to play.

He was part of the Hearts backroom team in Glasgow on Saturday as they booked their place in the final with a 3-0 win against Inverness and his manager wants him to be on call again to sooth his youngsters’ nerves.

“Steven is an experienced player who’s been to Hampden on numerous occasions so it made sense to take him along and have him talk about his experiences, particularly to the younger players,” explained Levein.

“Everything Steven does is done diligently and he did a good job. We’ll probably do the same for the final.

“We’re still working on a new contract for him. We’ve made another step forward this week and have another meeting set for next week.”

The cup final is still five weeks off and the Hearts players have been warned they had better not let their focus slip, especially with Rangers visiting the capital on Saturday.

Levein said: “I’ve been thinking about Rangers, the cup final is too far away to think about right now.

“We’ve got to the final but that’s now put to bed.

“Maybe the players are thinking about it but I hope not. We have a big match at home to Rangers and that will be hard enough in itself to hold all of our attention.

“To be involved in the cup final the players need to perform individually very well between now and the cup final. That incentive is there but I don’t have to remind them of it.”

Meanwhile, Levein has attempted to pour cold water on rumours suggesting Rangers are closing in on a deal for defender John Souttar, saying: “I’m not sure John would want to go there to be honest.”